This story originally appeared in the Winter 2020 issue of Sports Spectrum Magazine. It has been modified slightly as Western Kentucky prepares for its first 2021 NCAA Tournament match Wednesday night. For more in-depth feature stories like this, subscribe to our quarterly magazine for only $18. 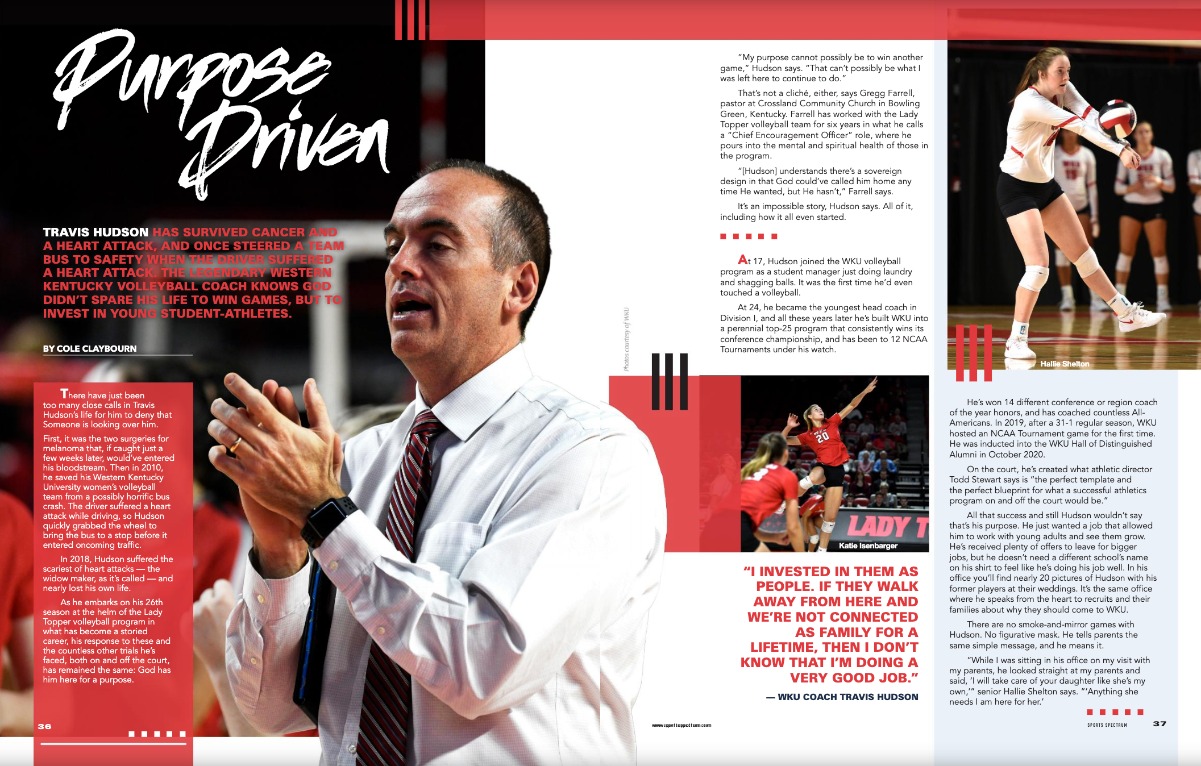 Travis Hudson has survived cancer and a heart attack, and once steered a team bus to safety when the driver suffered a heart attack. The legendary Western Kentucky volleyball coach knows God didn’t spare his life to win games, but to invest in young student-athletes.

There have just been too many close calls in Travis Hudson’s life for him to deny that Someone is looking over him.

First, it was the two surgeries for melanoma that, if caught just a few weeks later, would’ve entered his bloodstream. Then in 2010, he saved his Western Kentucky University women’s volleyball team from a possibly horrific bus crash. The driver suffered a heart attack while driving, so Hudson quickly grabbed the wheel to bring the bus to a stop before it entered oncoming traffic.

In 2018, Hudson suffered the scariest of heart attacks — the widow maker, as it’s called — and nearly lost his own life.

Now in his 26th season as his team prepares for the 2021 NCAA Tournament, his response to these and the countless other trials he’s faced, both on and off the court, has remained the same: God has him here for a purpose.

“My purpose cannot possibly be to win another game,” Hudson says. “That can’t possibly be what I was left here to continue to do.”

Today I ran 4 miles in Hattiesburg Mississippi after our practice prior to the 1st spring CUSA vball tourney in history. 3 years ago today, I had a widow maker heart attack that left me lying in an ICU after being given a 12% chance of survival. Life sure is strange sometimes.

That’s not a cliche, either, says Gregg Farrell, pastor at Crossland Community Church in Bowling Green, Kentucky. Farrell has worked with the Lady Topper volleyball team for six years in what he calls a “Chief Encouragement Officer” role, where he pours into the mental and spiritual health of those in the program.

“[Hudson] understands there’s a sovereign design in that God could’ve called him home any time He wanted, but He hasn’t,” Farrell says.

It’s an impossible story, Hudson says. All of it, including how it all even started.

The Lady Toppers enter this year’s tournament 21-0 and ranked 19th in the nation. They’ll play Jackson State in the first round on Wednesday in Omaha, Nebraska, where the entire NCAA Tournament will be played. It’s the 13th time the program has made it to the NCAA Tournament and the 11th time as an automatic bid.

It’s just another tally to the myriad accomplishments the program has seen since Hudson took over.

At 17, he joined the WKU volleyball program as a student manager just doing laundry and shagging balls. It was the first time he’d even touched a volleyball.

At 24, he became the youngest head coach in Division I, and all these years later he’s built WKU into a perennial top-25 program that consistently wins its conference championship, and has now been to 13 NCAA Tournaments under his watch.

He’s won 15 different conference or region coach of the year honors (including the AVCA South Region Coach of the Year honor this season) and has coached countless All-Americans. In 2019, after a 31-1 regular season, WKU hosted an NCAA Tournament game for the first time. He was inducted into the WKU Hall of Distinguished Alumni in October 2020.

On the court, he’s created what athletic director Todd Stewart says is “the perfect template and the perfect blueprint for what a successful athletics program on and off the court would be.”

All that success, and still Hudson won’t say that’s his purpose. He just wanted a job that allowed him to work with young adults and see them grow. He’s had plenty of offers to leave for bigger jobs, but he said he doesn’t need a different school’s name on his shirt to feel like he’s doing his job well.

The on-court success of the Lady Topper program under Hudson is undeniable, but perhaps the most impressive statistics — and the ones he’s most proud of — are these: The program boasts a 100-percent graduation rate, and just two players in Hudson’s previous 25 years have transferred. In the college athletics world where transfer numbers are soaring, that’s a rather impressive feat.

“I think that speaks volumes to the culture that he has here,” Stewart says. “A culture that exudes success in every respect.”

“My purpose cannot possibly be to win another game. That can’t possibly be what I was left here to continue to do.” — Coach Hudson

The players can all sense the genuine humanity that Hudson exudes and, as Farrell put it, he’s just able to connect with the humanity of other people well.

“I think that’s why our alumni base is still so connected here because I didn’t just invest in them as a volleyball player,” Hudson says. “I invested in them as people. If they walk away from here and we’re not connected as family for a lifetime, then I don’t know that I’m doing a very good job.”

Hudson has attended numerous weddings of his players. One former player got seriously injured on a hiking trip in Hawaii and Hudson was close to flying out to be with her in the hospital.

There was also one of his former All-Americans, Alyssa Cavanaugh, who needed a bone marrow transplant after being diagnosed with leukemia. Hudson came up with an idea that if a WKU student got tested and was found to be a match for Cavanaugh, he would pay for their next semester of college. Cavanaugh’s father ended up being the match, but unfortunately, she lost her battle with cancer last fall. The Lady Toppers have dedicated this season to her.

There was also the time in 2011 when Hudson and the Lady Topper team befriended a local girl, Harlie Bryant, who was diagnosed with a tumor behind her eye, and began to raise support for her. She’s now an honorary member of the program.

“What I’ve always believed has been the key to our success, you can’t buy it with money,” Hudson says. “It’s about kids that really, truly are connected to one another — kids that understand I’m going to love them whether they get the game-winning kill or they don’t, whether they turn out to be an All-American or they don’t. This journey we’re on together is way bigger than just volleyball.”

The stories of Hudson’s care for people goes on and on. His players and others who know him have spoken about how he’s able to keep things in perspective.

“I just think he’s got a really good grasp of who he is, who God is, and why God has him where he is and what he’s doing,” Farrell says.

One of his remaining goals was to host an NCAA Tournament match. He got his wish in 2019 when the 19th-ranked Lady Toppers faced off in the second round against in-state rival, and fellow powerhouse program, Louisville. Diddle Arena was nearly sold out and the buzz around town for the game was palpable.

WKU lost a heartbreaker in five sets. Where it would’ve been easy to focus on the what-ifs and dwell on the loss, Hudson spoke in his postgame press conference of going home to hug his kids, his wife, tell them he’s missed them, and thank God for the blessings he experienced over the previous year.

“You know, I walked away thinking to myself, and I think that’s what I said that night, ‘At what point do you quit asking for more?’” he said. “Like, at what point are you just grateful?”

Through everything he’s done and been through, because he does it with such gratitude, it’s easy to forget how serious the events were that Hudson has endured. He could’ve lost his own life in any one of those instances — the cancer, the bus crash, then the heart attack.

“He sees his tragic events as adversity. The adversity for him becomes an accelerant — to drive him deeper into what he sees as a purpose,” Farrell says. “And that purpose is fulfilled through being a coach and an ambassador for Western Kentucky University. But he realizes that’s really not his purpose. His purpose is to honor God and advance the Kingdom. He just seems to know that he’s here on purpose and for a purpose.”

As he was being rushed to the emergency room to be operated for his heart attack, Hudson remembers feeling a calmness over him. He knew God still had work for him to do. His purpose is still being fulfilled. He’s got lives to invest in.

“People talk about it being a gift, and in many ways things like that are a gift because, A) It makes me believe that my time here on this earth, I’m doing it the right way, and I hope that’s the case,” he says. “B) It tells me that I’ll be ready when that moment comes, and C) It tells me that I’m still here through all these things because I still have work to do. I try to remember that constantly.”

This story originally appeared in the Winter 2020 issue of Sports Spectrum Magazine. For more in-depth feature stories like this, subscribe to our quarterly magazine for only $18.