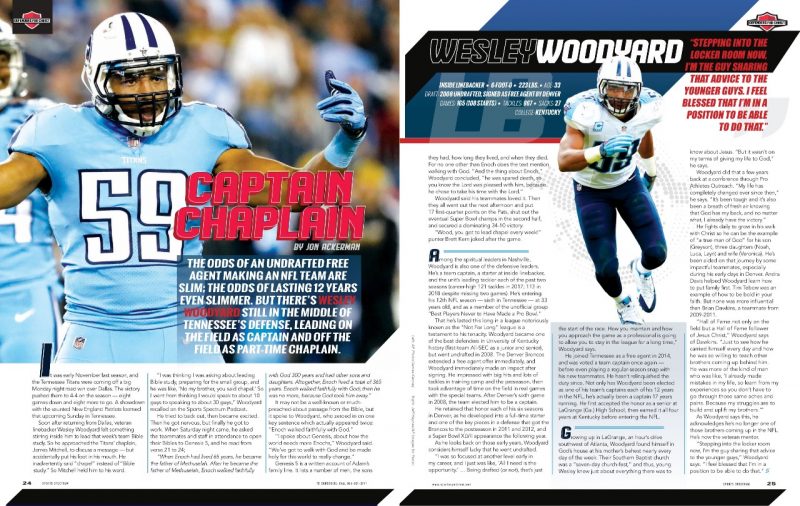 THE ODDS OF AN UNDRAFTED FREE AGENT MAKING AN NFL TEAM ARE SLIM; THE ODDS OF LASTING 12 YEARS EVEN SLIMMER. BUT THERE’S WESLEY WOODYARD STILL IN THE MIDDLE OF TENNESSEE’S DEFENSE, LEADING ON THE FIELD AS CAPTAIN AND OFF THE FIELD AS PART-TIME CHAPLAIN.

It was early November last season, and the Tennessee Titans were coming off a big Monday night road win over Dallas. The victory pushed them to 4-4 on the season — eight games down and eight more to go. A showdown with the vaunted New England Patriots loomed that upcoming Sunday in Tennessee.

Soon after returning from Dallas, veteran linebacker Wesley Woodyard felt something stirring inside him to lead that week’s team Bible study. So he approached the Titans’ chaplain, James Mitchell, to discuss a message — but accidentally put his foot in his mouth. He inadvertently said “chapel” instead of “Bible study.” So Mitchell held him to his word.

“I was thinking I was asking about leading Bible study, preparing for the small group, and he was like, ‘No my brother, you said chapel.’ So I went from thinking I would speak to about 10 guys to speaking to about 30 guys,” Woodyard recalled on the Sports Spectrum Podcast.

He tried to back out, then became excited. Then he got nervous, but finally he got to work. When Saturday night came, he asked the teammates and staff in attendance to open their Bibles to Genesis 5, and he read from verse 21 to 24;

It may not be a well-known or much-preached-about passage from the Bible, but it spoke to Woodyard, who zeroed in on one key sentence which actually appeared twice: “Enoch walked faithfully with God.”

“I spoke about Genesis, about how the world needs more Enochs,” Woodyard said. “We’ve got to walk with God and be made holy for this world to really change.”

Genesis 5 is a written account of Adam’s family line. It lists a number of men, the sons they had, how long they lived, and when they died. For no one other than Enoch does the text mention walking with God. “And the thing about Enoch,” Woodyard concluded, “he was spared death, so you know the Lord was pleased with him, because he chose to take his time with the Lord.”

Woodyard said his teammates loved it. Then they all went out the next afternoon and put 17 first-quarter points on the Pats, shut out the eventual Super Bowl champs in the second half, and secured a dominating 34-10 victory.

“Wood, you got to lead chapel every week!” punter Brett Kern joked after the game.

“We’ve got to walk with God and be made holy for this world to really change.”
— Wesley Woodyard 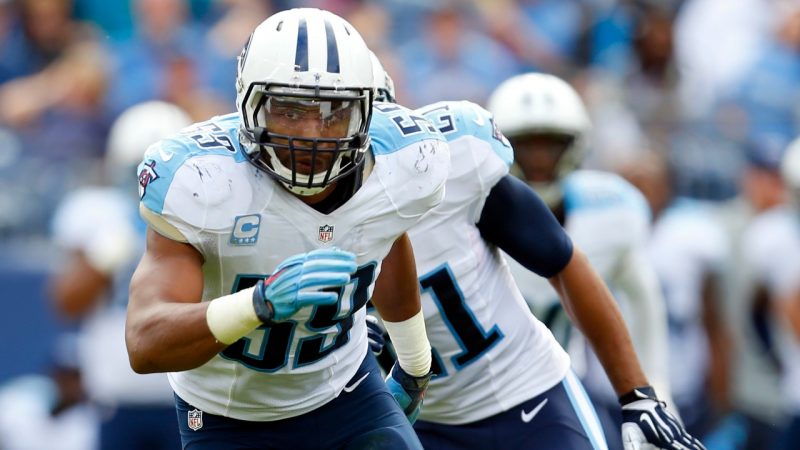 Among the spiritual leaders in Nashville, Woodyard is also one of the defensive leaders. He’s a team captain, a starter at inside linebacker, and the unit’s leading tackler each of the past two seasons (career-high 121 tackles in 2017; 113 in 2018 despite missing two games). He’s entering his 12th NFL season — sixth in Tennessee — at 33 years old, and as a member of the unofficial group “Best Players Never to Have Made a Pro Bowl.”

That he’s lasted this long in a league notoriously known as the “Not For Long” league is a testament to his tenacity. Woodyard became one of the best defenders in University of Kentucky history (first-team All-SEC as a junior and senior), but went undrafted in 2008. The Denver Broncos extended a free agent offer immediately, and Woodyard immediately made an impact after signing. He impressed with big hits and lots of tackles in training camp and the preseason, then took advantage of time on the field in real games with the special teams. After Denver’s sixth game in 2008, the team elected him to be a captain.

He retained that honor each of his six seasons in Denver, as he developed into a full-time starter and one of the key pieces in a defense that got the Broncos to the postseason in 2011 and 2012, and a Super Bowl XLVII appearance the following year.

As he looks back on those early years, Woodyard considers himself lucky that he went undrafted.

“I was so focused at another level early in my career, and I just was like, ‘All I need is the opportunity.’ … Being drafted (or not), that’s just the start of the race. How you maintain and how you approach the game as a professional is going to allow you to stay in the league for a long time,” Woodyard says.

He joined Tennessee as a free agent in 2014, and was voted a team captain once again — before even playing a regular-season snap with his new teammates. He hasn’t relinquished the duty since. Not only has Woodyard been elected as one of his team’s captains each of his 12 years in the NFL, he’s actually been a captain 17 years running…