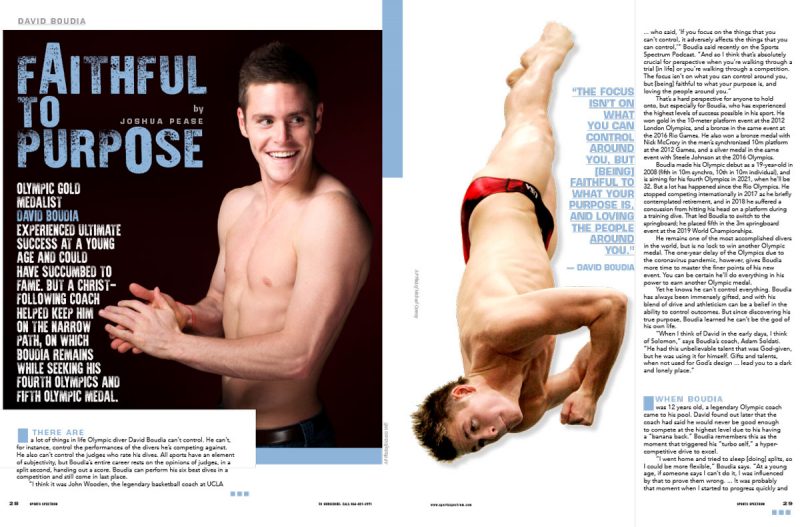 OLYMPIC GOLD MEDALIST DAVID BOUDIA EXPERIENCED ULTIMATE SUCCESS AT A YOUNG AGE AND COULD HAVE SUCCUMBED TO FAME. BUT A CHRIST-FOLLOWING COACH HELPED KEEP HIM ON THE NARROW PATH, ON WHICH BOUDIA REMAINS WHILE SEEKNG HIS FOURTH OLYMPICS AND FIFTH OLYMPIC MEDAL.

There are a lot of things in life Olympic diver David Boudia can’t control. He can’t, for instance, control the performances of the divers he’s competing against. He also can’t control the judges who rate his dives. All sports have an element of subjectivity, but Boudia’s entire career rests on the opinions of judges, in a split second, handing out a score. Boudia can perform his six best dives in a competition and still come in last place.

“I think it was John Wooden, the legendary basketball coach at UCLA … who said, ‘If you focus on the things that you can’t control, it adversely affects the things that you can control,’” Boudia said recently on the Sports Spectrum Podcast. “And so I think that’s absolutely crucial for perspective when you’re walking through a trial [in life] or you’re walking through a competition. The focus isn’t on what you can control around you, but [being] faithful to what your purpose is, and loving the people around you.”

That’s a hard perspective for anyone to hold onto, but especially for Boudia, who has experienced the highest levels of success possible in his sport. He won gold in the 10-meter platform event at the 2012 London Olympics, and a bronze in the same event at the 2016 Rio Games. He also won a bronze medal with Nick McCrory in the men’s synchronized 10m platform at the 2012 Games, and a silver medal in the same event with Steele Johnson at the 2016 Olympics.

Boudia made his Olympic debut as a 19-year-old in 2008 (fifth in 10m synchro, 10th in 10m individual), and is aiming for his fourth Olympics in 2021, when he’ll be 32. But a lot has happened since the Rio Olympics. He stopped competing internationally in 2017 as he briefly contemplated retirement, and in 2018 he suffered a concussion from hitting his head on a platform during a training dive. That led Boudia to switch to the springboard; he placed fifth in the 3m springboard event at the 2019 World Championships.

He remains one of the most accomplished divers in the world, but is no lock to win another Olympic medal. The one-year delay of the Olympics due to the coronavirus pandemic, however, gives Boudia more time to master the finer points of his new event. You can be certain he’ll do everything in his power to earn another Olympic medal.

Yet he knows he can’t control everything. Boudia has always been immensely gifted, and with his blend of drive and athleticism can be a belief in the ability to control outcomes. But since discovering his true purpose, Boudia learned he can’t be the god of his own life.

“When I think of David in the early days, I think of Solomon,” says Boudia’s coach, Adam Soldati. “He had this unbelievable talent that was God-given, but he was using it for himself. Gifts and talents, when not used for God’s design … lead you to a dark and lonely place.”

“The hope that I was putting my life in was like a broken cistern … And that’s when [Soldati] shared with me about the Gospel of Jesus and the sacrifice He had for my life. I started to realize I actually can’t do this life by myself. And so when I became weak and helpless is when I looked up and accepted Christ.” — David Boudia

When Boudia was 12 years old, a legendary Olympic coach came to his pool. David found out later that the coach had said he would never be good enough to compete at the highest level due to his having a “banana back.” Boudia remembers this as the moment that triggered his “turbo self,” a hyper-competitive drive to excel.

“I went home and tried to sleep [doing] splits, so I could be more flexible,” Boudia says. “At a young age, if someone says I can’t do it, I was influenced by that to prove them wrong. … It was probably that moment when I started to progress quickly and devote myself to achieving this lifelong dream of mine.”

Boudia trained tirelessly to master the tiniest details of his body, and arrived at Purdue University as one of the most highly-ranked diving athletes in the world. But the more Boudia achieved and the more fame he gained, the more he partied, the more he lived what would be many college students’ dream, the darker his life became. In 2009, as a sophomore, Boudia remembers feeling a sense of purposelessness in his life.

“I remember one specific night actually just thinking, ‘What’s the purpose of all this? Why am I here? What is life? Why?’ I [fell into] a deep depression, drinking a lot and contemplating suicide. If there’s no purpose in life, what’s the point of it?” he said.

A teammate told Boudia that Soldati had helped her through a challenging time in life, so Boudia reached out to him. The coach invited him over to his house, where he shared the Gospel. Boudia had grown up around church, but had never grabbed hold of Christianity as something more than a quick fix. As he listened to Soldati, however, Boudia realized there was a whole new level of faith he’d never experienced.

“The hope that I was putting my life in was like a broken cistern,” Boudia says. “And so that was my life, putting my hope in all these things that we’re not supposed to be putting our hope in. And that’s when [Soldati] shared with me about the Gospel of Jesus and the sacrifice He had for my life. I started to realize I actually can’t do this life by myself. And so when I became weak and helpless is when I looked up and accepted Christ, probably a month after investigating God’s Word.” 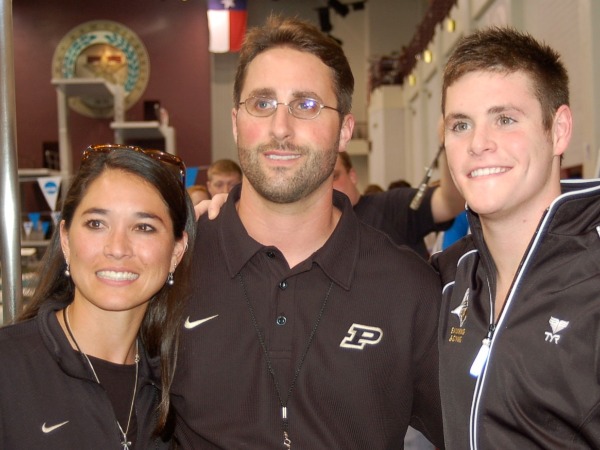 There are a lot of things in life Soldati can’t control. He can’t control his athletes’ work ethic, for instance. Or their ability to handle distractions and fame.

Today, Soldati is known as even-tempered, rarely angry, and kind to his athletes. It didn’t used to be that way. In 2001, Soldati began his own journey of letting Jesus transform his life, and one of the things he quickly realized was that his coaching perspective had to change.

“I look back 20 years ago when I started coaching, and it was focused all on me,” Soldati says. “From the outside, I looked like a great coach, but really I just wanted to be successful. My identity was wrapped up in ‘look how successful I am, and look at me, and recognize me.’ If our purpose is for ourselves, we’ll see everybody as a means to get what we want. So if a player is listening and working hard, then I love them, because they’re making me look good. But if they aren’t, then I’ll respond in a way that isn’t helpful. I’ll get angry.”

Soldati believes defining characteristics of a coach should be patience, surrendering control and loving athletes where they’re at, as they are. This patience stems from realizing how infinitely patient God is with him.

“Jesus has continued to love me and extend mercy into my life, and be longsuffering in walking with me,” Soldati says. “There are countless examples of athletes struggling with being on time, or working hard, and it’s made me patient.”

Soldati will often spend 4-5 hours a day with athletes he is training, building a close camaraderie with them, and fighting the temptation to control their lives, decisions or futures. Instead, Soldati says he wakes up every day attempting to tell God, “The glory is Yours.” He focuses on keeping his relationship with his wife, kids and God at the center of who he is. It’s not easy, but there’s peace in the releasing of control.

Soldati says there’s this great quote about control from the famous coach, John Wooden. I mention that I just heard that quote recently.

When Boudia won the gold medal in 2012, he looked at Soldati’s face and saw an unexpected emotion underneath the pride and elation: fear. Soldati is asked if he remembers that moment the same way.

“Initially it was probably 90 percent happiness and 10 percent fear,” Soldati says. “But 15 minutes after the competition, it was reversed. I felt a tremendous amount of caution, and I talked to my wife right after, and she said, ‘We’ve gotta go to war now.’”

Soldati had deeply invested not only in David as a diver, but David as a follower of Christ. Soldati knew Boudia was about to be handed the world on a silver platter — national television appearances, money, fame. All of which would be sledgehammering the same lie Boudia used to believe: You’re in control, you’re responsible for all this, you deserve this.

“We think it’s in valleys that we have opportunities to grow,” Soldati says, “but in the super high mountains, there are serious tests, serious challenges. It’s so easy to begin to believe all the glitz and glitter of this. David was a young believer. It’s a difficult thing, being pulled so hard by the world, the majority of which don’t have an interest in the things of God…”